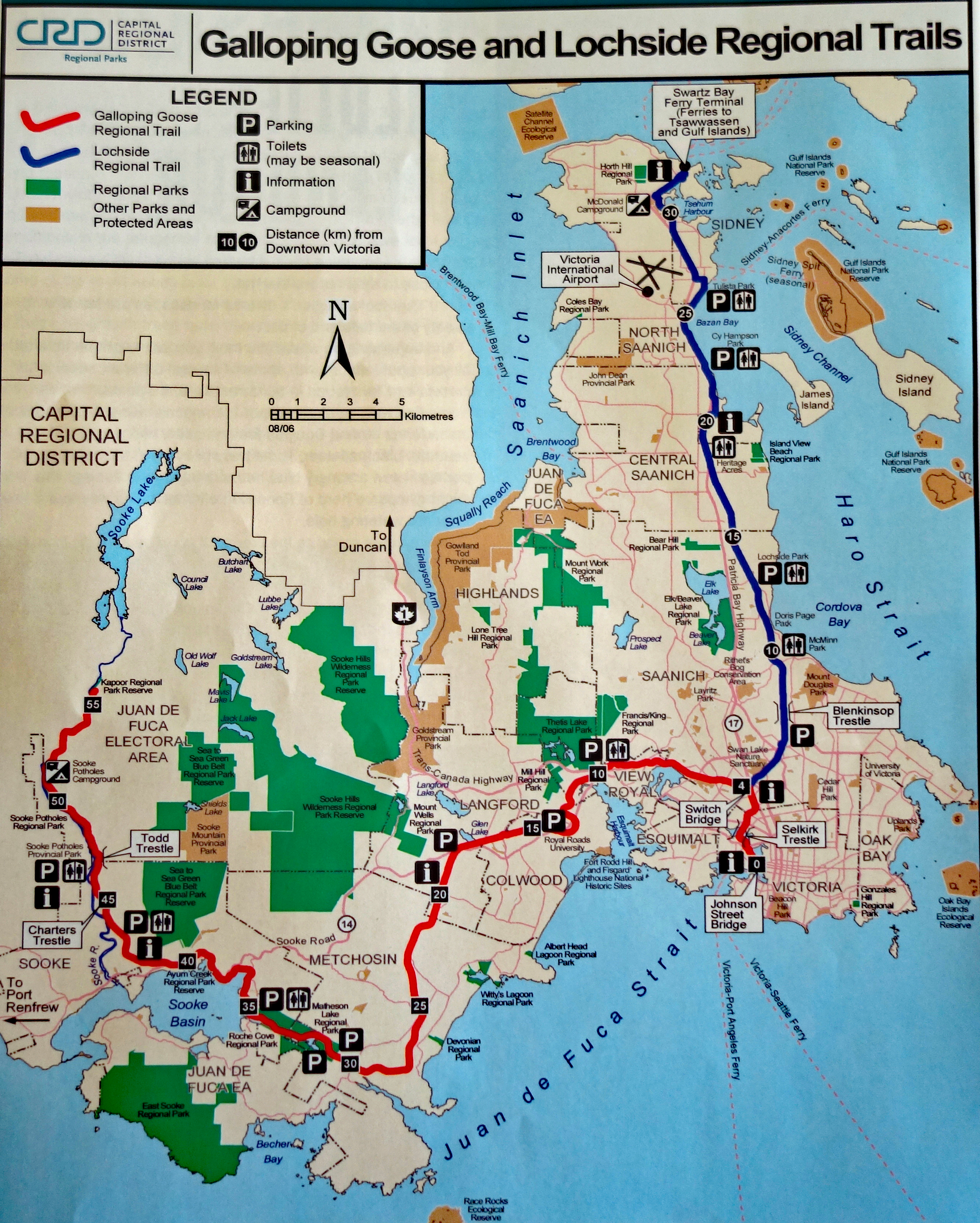 There are two well-known multi-use pathways originating in Victoria, the Galloping Goose and the Lochside Trail, both former railway lines converted to beautiful trails for walking, running, biking and horseriding.  Our first bike ride was on the Lochside Trail, which stretches 29 km from Swartz Bay at the North end of the Saanich Peninsula, ending when it intersects with the Galloping Goose trail in Victoria.  Leaving our apartment in West Victoria we cycled 16 km towards Swartz Bay passing through wetlands, farmlands, suburban neighbourhoods, down country lanes and past mansions overlooking the ocean.  Being our first bike ride in many months, we thought it best to turn around before the end and head home before our legs ached and we got saddle fatigue (ie a sore butt) 😂  We cycled the Lochside Trail trail a second time making it just over 22 km before turning around.  Leaving the farmlands, the trail ran beside the highway and was not very interesting which prompted us to turn and head back to Victoria.  All in all we clocked 44.41 km on this second ride, another nice day on the bike enjoying the scenery.  If you have the option of arranging a car shuttle, riding one way from Swartz Bay to Victoria would be a nice ride.

We read that a particularly scenic ride was the 18 km section between Matheson Lake and the Todd Trestle Bridge so we put the bikes on the car, packed a lunch and drove to the Sooke Potholes parking lot, the far end of our planned ride.  Before we took the bikes off the car though, we hiked to the Sooke Potholes.  Without doing more hiking than we planned to do we got only a brief look at the potholes from a viewpoint above the canyon.  The potholes have been carved by the Sooke River over thousands of years and in the summer, when calmer waters prevail,  provide clear pools for swimming. 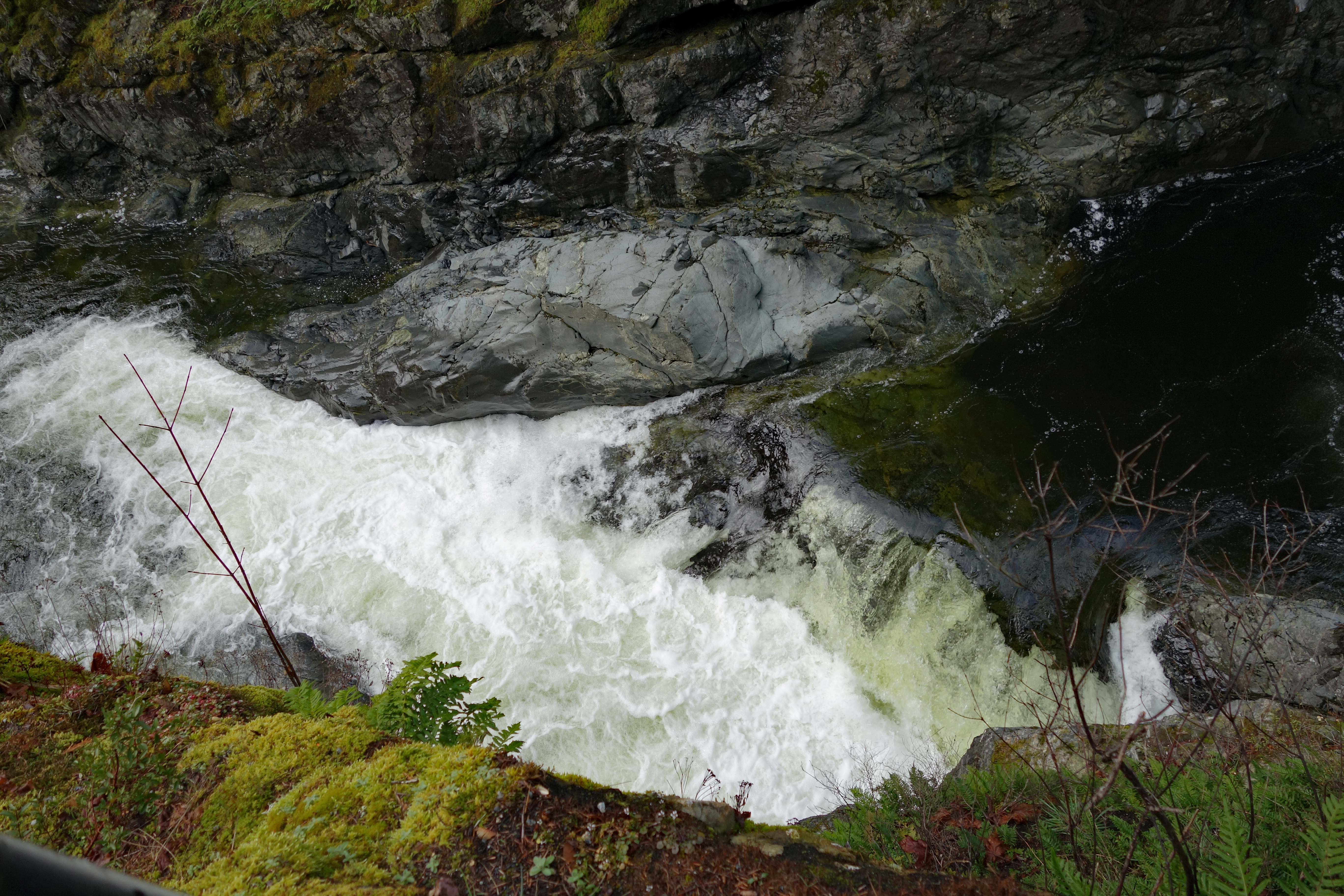 From the potholes, we drove to the parking lot at Sooke River Road, approx the 44 km mark of the Galloping Goose Trail. Heading away from Victoria we rode NW for just over 3 km to reach the stunning Todd Trestle Bridge.  This bridge is one of the highlights of the trail with its open cross-braced framework curving high above Todd Creek.  We hopped off our bikes and looked down at the creek, 26 meters below.   Todd Creek Trestle was built in 1918 as part of the Canadian National Railway, decommissioned as a rail line in 1984.  Considered a landmark of the trail it was restored in 2019-2020, adding 50 years to the lifespan of the bridge.

Turning around at Todd Creek we started riding back towards Victoria.  Near the 45 km mark is the Charters Trestle, a steel bridge decked with wood, not as impressive as the Todd Creek Trestle, but a pretty place to admire the views.  We continued riding to approx the 32 km marker through peaceful forests, alongside Sooke Basin and past Roche Cove before turning around at the eastern end of Matheson Lake for the return trip to the car.

We agree that the further out portion of the Galloping Goose trail is much prettier and feels more remote.  A nice option would be to organize a car shuttle and ride the entire 55 km one way from Leechtown into Victoria.  Perhaps next time we are out this way!  Let us know if you do the entire trail, we’d love to hear about it.