Our drive from Valencia to Granada took us just over 5 hours and once again we passed miles and miles of orange groves and olive groves.  Heading inland and with increasing elevations the landscape became dry and desert looking with cactus growing along the roadside.  As we got closer to our destination we were rewarded with views of the snow capped Sierra Nevada mountains, which Granada sits at the foot of.  I don’t think either of us realized that we would be in the mountains when we planned our stop here.  So why are we here??  The Alhambra!!  A few years ago some friends visited here and raved about it so we decided it was a must see during our tour of Spain.

Granada itself has it’s typical share of churches, museums and old buildings however, Granada has The Alhambra.  The Alhambra is an ancient palace, citadel and fortress complex constructed over many centuries, considered by some to be one of the 10 wonders of the world, and is Spain’s most visited monument.

The palace was built mostly between 1238 and 1358 by the Nasrid Dynasty, the last Muslims to rule in Spain, and is Spain’s most significant and well known site of Islamic architecture.  The Alhambra was the last remaining Moorish stronghold in Europe as well as the oldest Muslim palace in the world.  Filled with quiet courtyards and flowing water it invokes a feeling of peace and relaxation within it’s walls.  Much of the ornamentation in The Alhambra is carved plaster, rather than stone, on the upper walls reaching upward to arched ceilings. 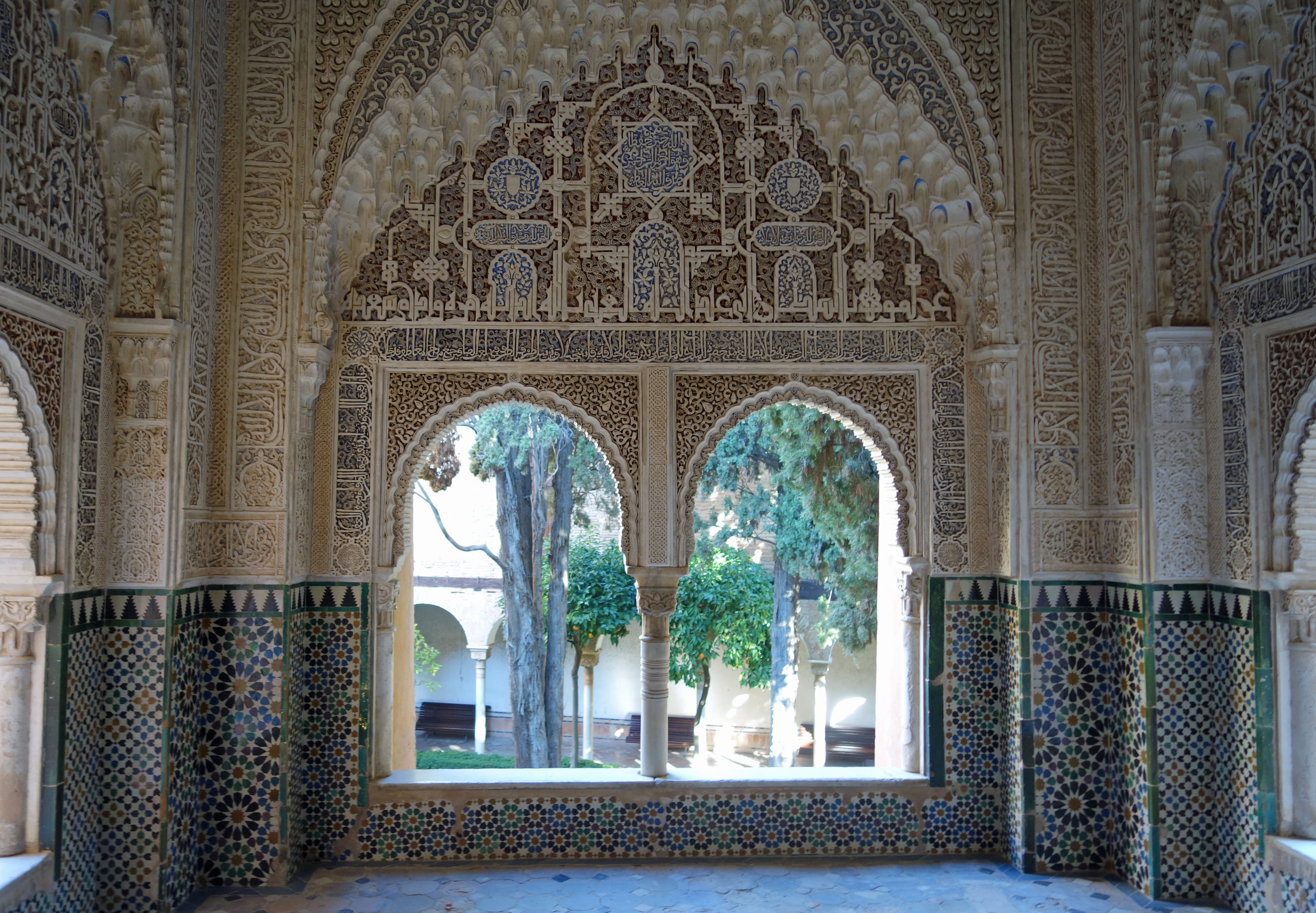 Some of the vaulted ceilings are honeycombed stucco having the appearance of stalactites, and on the lower portion the walls are intricate mosaic patterns. 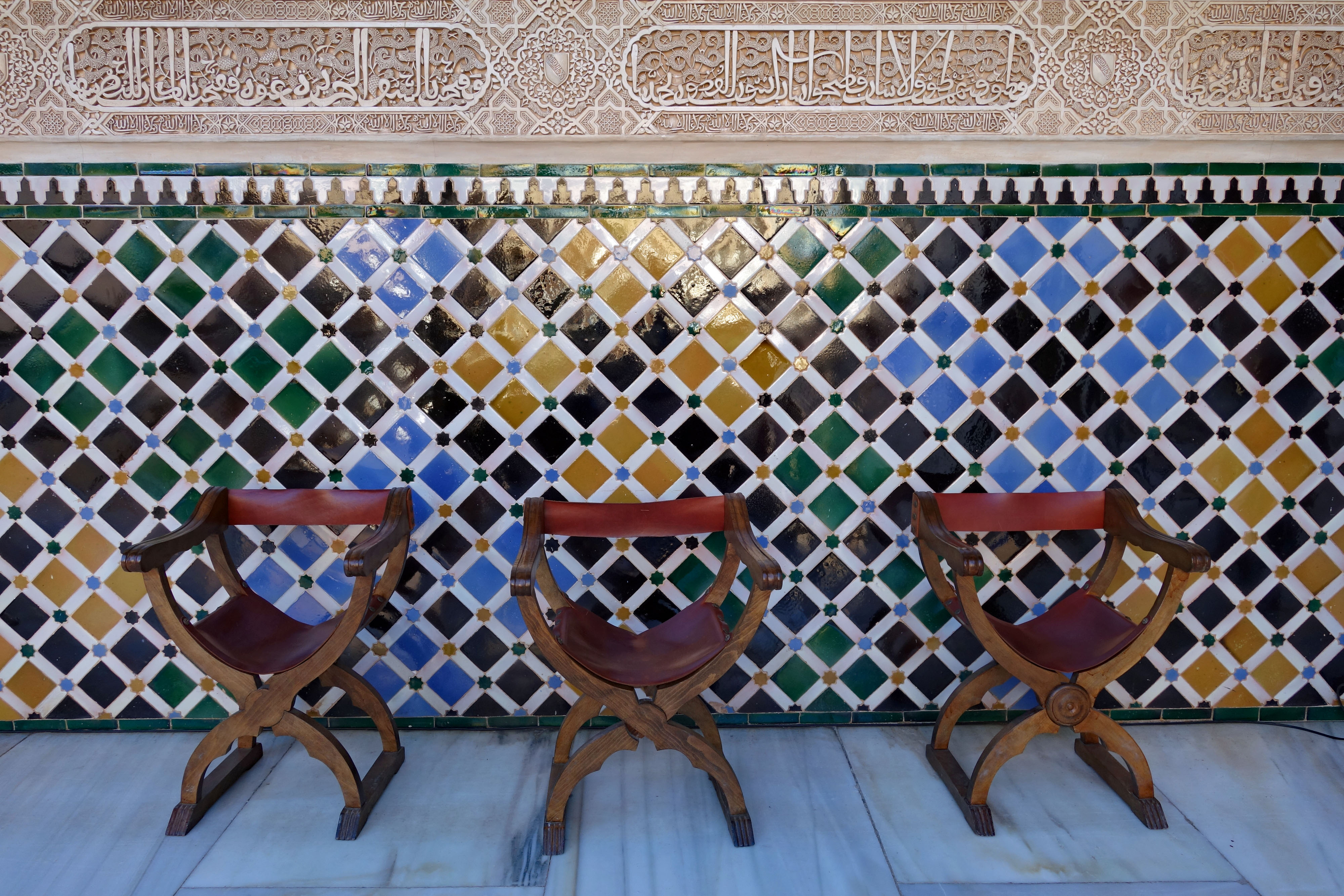 This is the first example we have seen of carved plaster and the how beautifully detailed the designs can be made.

The Court of the Lions is the main courtyard of the Nasrid Dynasty, Palace of the Lions, and possibly the most famous courtyard in the Alhambra complex.

In the center is an alabaster fountain supported by 12 marble lions surrounded by 124 white marble columns supporting an ornately decorated gallery.  Each of the 12 lions surrounding the alabaster fountain is uniquely carved making no two the same.  When originally designed, each hour one lion would produce water from it’s mouth, powered by an ingenious hydraulic system, which is no longer functioning.

Our tour of The Alhambra took us 6 hours and we’re pretty sure we covered most of it 🙂  The admission ticket cost of 14.85 Euros (16.86 USD) plus 6 Euros (6.82 USD) for an audio guide allows you to wander the grounds as long as you like but entrance to the Nasrid Palaces is a scheduled time only visit, our time being booked for 11 am.  Once inside you can wander at your own pace, there seems to be no time limit on how long you can stay.  I have far too many photos of this amazing place to fit in the post so more can be seen on the Instagram link to the right.

Seeing the snow capped mountains in the distance prompted us to take a drive up to Estacion de Sierra Nevada ski resort above Granada, the highest ski resort in Spain and the most southern resort in Europe.  The drive was only 45 minutes with no snow until we actually arrived at the resort where the snow guns were busy snow making.   It looks like a bad snow year, or perhaps it is early in their season, with much of the hillside still exposed and what we did see for skiing appeared to be groomed runs on man made snow.

Not what we are used to coming from the rugged Rocky Mountain ski resorts near home.  At the foot of the slopes there is the resort village of Pradollano, home to many shops, hotels, restaurants, cafes, bars and ski schools.  The village elevation is about 2,100 m (6,890 ft) while the summit is about 3,400 m (11,150 ft).  The resort area and ski hill were busy with a lot of skiers and snowboarders so we found a sunny spot on a deck to have a hot drink (it was really cold) and enjoy the sunshine.  It brought back memories of our spring skiing days enjoying lunch on the patio 🙂  We took a look at the lift ticket prices and the cost for a weekend day pass was 39.50 Euros (44.90 USD) and a weekday pass 38.50 Euros (43.75 USD).  It was a fun and enjoyable afternoon being a complete departure from what we have been doing lately.

We planned a self guided walk around the old neighborhoods of Granada taking us up to the Albaicin and Sacromonte districts, on the hillside opposite The Alhambra, and separated from the Alhambra by the Darro river.

The Albaicin district is the old Arab quarter filled with winding, narrow streets and whitewashed buildings.

At the top of the Albaicin district is the Mirador San Nicholas, an open court with gorgeous views across the valley to the Alhambra fortress.

The caves of the Sacromonte district have been the home to Gypsies for centuries, and they still preserve their racial identity to this day.  This is the neighborhood where you will find an abundance of flamenco performances.

Our final day of touring we wandered through the Realejo neighborhood, which was the old Jewish neighborhood of Muslim Granada.  This is also the district where you will find the majority of street art by local favorite El Nino.

Overall we have really enjoyed our time in Granada especially the variety of places to see.  The Alhambra is definitely the big draw but there is so much more to Granada and one week may not be long enough if you were to visit in the summer.  It was a bit to cold for us to enjoy tapas bar hopping but we did stop a few times for sangria and tapas!!  Our health has finally improved after being sick off and on for 3 months 🙂  We found a gym within a 10 min walk and now begin the process of rebuilding our fitness!

We continue the march South to our next destination, beach side on the Mediterranean in Estepona…..

Alhambra tickets need to be purchased well in advance of your visit, they sell out early.  We bought our tickets at this site.

4 thoughts on “Granada and The Alhambra”

We are in Canada until the end of November

Just 20 minutes outside of Trieste, Italy in Lipic

A Croatian day trip from Rovinj to Pula to admire