Seville is Spain’s 4th largest city with a population of approx 700,000 and capital of the autonomous community of Andalucia.  The Guadalquivir River cuts the city in half and is only 2 blocks from our apartment in the Los Remedios neighborhood.

On sunny summer days the riverbanks are crowded with locals escaping the heat of the city, we have been told it can be 45C here in the summer with the record being 56C!!  After a relaxing time near the water in Estepona we are once again in a city filled with centuries old buildings and historic neighborhoods.

Across the river from our apartment is The Plaza de Espana, built between 1914-1928 for the Ibero-American fair of 1929.  It was built with a blend of Moorish and Rennaisance styles that is distinctive of many buildings in Seville.  The half moon shaped building, fronted by a moat overlooking a large plaza with a beautiful fountain, is filled with eye catching ceramics all around. 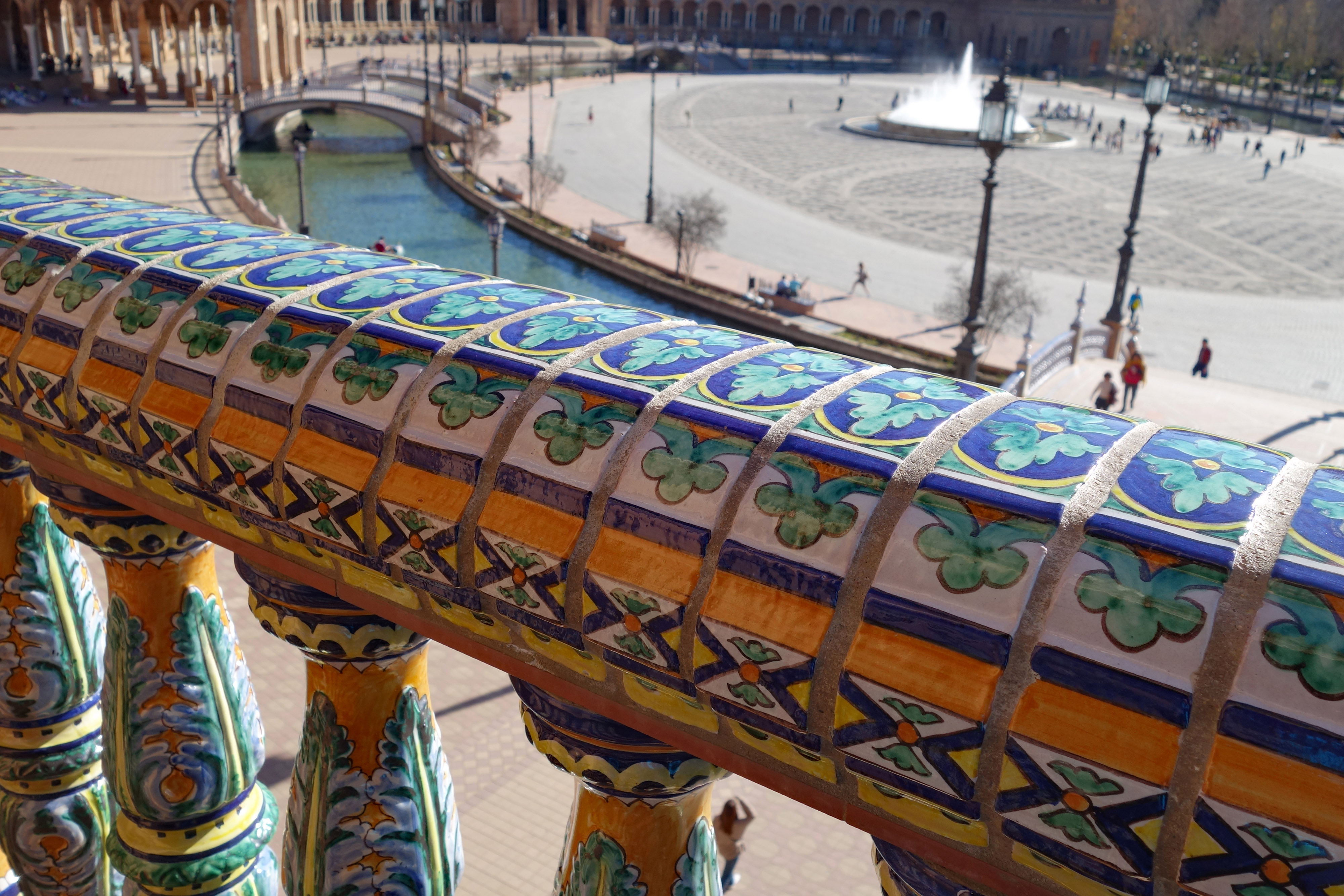 There are 48 ceramic covered benches representing the 48 Spanish provinces along the base of the building, popular with locals enjoying a sunny place to relax and read a book. The moat is busy with tourists in rowboats rowing in anything but a straight line, providing a great source of amusement for Blair.  There are also many horse drawn carriages offering tours of the Maria Luisa park which surrounds the Plaza.

On our second day we joined a free walking tour to get a local “Seville through their eyes” tour of the historic center of the city.  We met at the Torre de Oro, a 13th century watchtower on the riverbank which now houses a small maritime museum.  Our tour took us past the Alcazar, the Seville Cathedral, through an old Jewish neighborhood, past the Christopher Columbus monument and the former Royal Tobacco factory now housing university offices.  It was an interesting tour of just over 2 hours, offering us an overview of the history of Seville.  The tobacco factory building dates back to the 15th century and was the inspiration for the opera Carmen, who was a cigarrera at the factory.  Rumor has it that hundreds of men lined the streets at quitting time to watch the over 1,000 women workers exit the factory.

One of Seville’s most popular, and unusual, attractions is The Metropol Parasol, known locally as Las Setas, or ‘the Mushrooms’, because of the distinctive shape of its wooden canopies and supporting pillars. When work started on the Mushrooms in 2005, Roman remains were found underneath Plaza Encarnación, making construction a lengthy and controversial process. To preserve the extensive remains, which can be seen on the lower ground floor, these enormous wooden fungi are supported on just a few white pillars above the square. On the monument’s roof, a winding walkway provides stunning views over the city.  The cost was 3 Euros each (3.40 USD) to take the elevator to the rooftop walkway.

The Seville Cathedral is immense and awe-inspiring in it’s scale and majesty.  It is the world’s largest Gothic cathedral and as with many other cathedrals, was built over what used to be a mosque.  When it was completed in the 16th century it supplanted the Hagia Sophia in Istanbul (which we recently visited) as the largest cathedral in the world.  Giralda, the large bell tower was the mosques original minaret to which in the 16th century the Christians added more levels, incorporating the bells.

Inside the cathedral is the monumental tomb of Christopher Columbus carried by four kings representing the four regions of Spain-Castilla, Leon, Navarra and Aragon.  It is a lovely piece of art inside the amazing Seville Cathedral.

The highlight of this cathedral surely is the Capilla Mayor (Main Chapel) with it’s massive gold gilded altarpiece taking 80 years to complete.  It was the lifetime work of craftsman Pierre Dancart and is the largest and richest altarpiece in the world and one of the finest examples of Gothic woodcarving anywhere.  The amount of gold on the wood is breathtaking!!

The cathedral is a treasure trove of art housing hundreds of paintings, carvings, huge silver candlesticks, jewels and crowns.  The quantity of artifacts to see in this massive cathedral can be a bit overwhelming.  Our ticket included access to climb the Giralda tower which consists of 35 ramps to the top of the tower, built so that horses could easily go up in the past.  The Moors built this tower over 1,000 years ago and it has withstood two major earthquakes, quite a testament to their building skills.

From the top of the bell tower there are fantastic views of Seville.  Our cathedral tickets cost 9 Euros (10.23 USD) each and the audio guide which was invaluable, 3 Euros (3.40 USD) each.

We had not planned on visiting the Real Alcazar in Seville after so recently visiting The Alhambra in Granada however the tourist information office suggested the Alcazar was different and we should not miss it while in Seville…so off we went to see another palace.  The palace complex is a gorgeous mixture of Arab and Christian architecture and has been revamped many times over the 11 centuries of it’s existence.  It is an excellent example of Mujedar style which refers to work done by Moorish artists who were subjects of Christian kings.

The exquisite rooms are decorated with plasterwork, tiling and coffered ceilings.  The entrances with 3 horseshoe shaped arches signified they were access to the private rooms of the Sultans or Kings where only family was allowed.

The Real Alcazar was used as a location for scenes in Game of Thrones Seasons Five and Six as the Water Gardens of Dorne for any of you fans out there.  While the Alcazar is not as large and impressive as the Alhambra, we thought it well worth a visit. The entry tickets cost 12.50 Euros each (14.20 USD) plus we signed up for a guided tour at an additional cost of 14 Euros (15.90 USD) each.

After seven days of historic and cultural sights we are off, headed back to the ocean, this time in Portugal.  So long Seville…..

We bought our tickets on entry to the Seville Cathedral because it is quiet here in January, however in busy season it would be best to buy them online at this site to avoid the long lines.

We bought our tickets for the guided tour of the Alcazar on tripadvisor and the guide purchased our entry tickets so we skipped the line, which was not very long in January.

6 thoughts on “Seven days in Seville”

We are in Canada until the end of November

Just 20 minutes outside of Trieste, Italy in Lipic

A Croatian day trip from Rovinj to Pula to admire