Staying anywhere for this short a time is not ideal however we had 3 nights in between meeting friends in Stuttgart and then in Paris.  We looked for a town roughly half way between Stuttgart and Reims where we will take the high speed train into Paris.  Why the train you ask?  Parking in Paris is impossible and if you were lucky enough to find parking, it would be outrageously expensive.  The simpler, and less stressful, solution was to park our car for 3 days at the Reims train station, enjoy the high speed 45 minute train ride, then return to Reims where we will be staying for a few days. 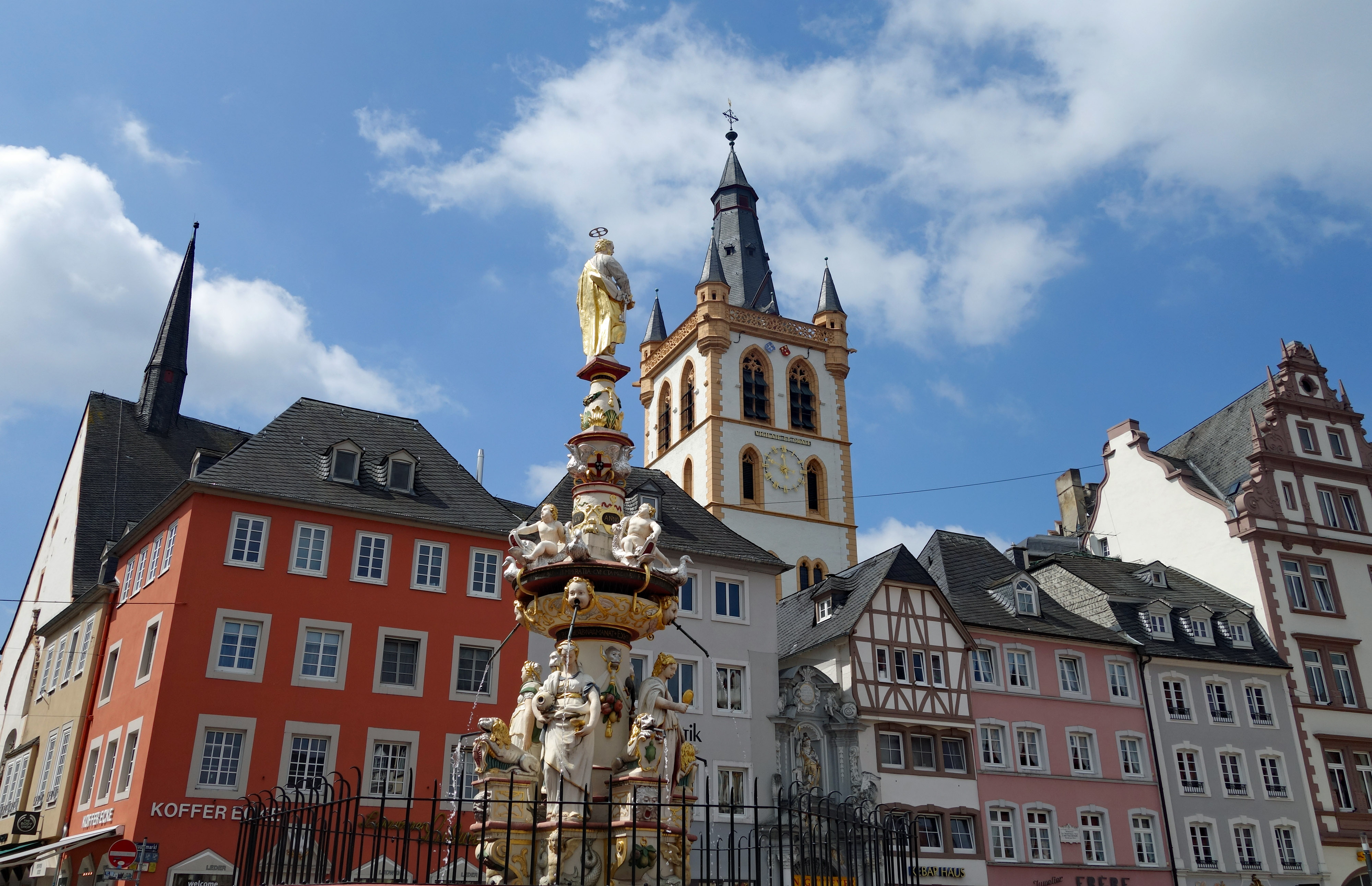 Trier, Germany’s oldest city, lies at the head of the scenic Mosel River Valley near the Luxembourg border.  Having only 2 days here did not give us time to explore outside the city or into nearby Luxembourg…next time 🙂  It rained the entire first day so we found a nice gym to spend the morning but now we are down to 1 day of sightseeing!!  Fortunately Trier is a small city and once again Blair designed the perfect walking tour seeing the major sights which were an easy walk from our apartment.  Here we found Germany’s oldest Christian Church, an enjoyable market square and some wonderful Roman ruins.

Trier’s most famous landmark, the Porta Nigra (black gate) was erected around 180 AD and today is the best preserved Roman city gate north of the Alps, and the largest outside of Italy.  Composed of 7,200 gigantic sandstone blocks, the solid structure survived centuries of repurposing and reconstruction.  The name Porta Nigra comes from the dark color of the stone, caused by centuries of residue.

The imposing Trier Cathedral, Germany’s oldest bishop’s church, boasts 1,700 years of history and the architectural jumble of Gothic, Baroque and Romanesque elements testify to its past.  The interior holds noteworthy relics and the treasury holds a collection of art from the late antiquity to the 20th century, medieval manuscripts and liturgical garments.

Germany’s oldest Gothic church is right beside the Trier Cathedral.  Construction of the Liebfrauenkirche, Church for our Lady, began in 1230 and was completed some 30 years later.  The floor plan is almost circular and resembles a twelve petaled rose, a symbol of the Virgin Mary.  When the sun shines through the stained glass windows and bounces off the sandstone columns, the whole interior lights up in a rainbow of colors.  The 12 supporting columns are painted with the 12 apostles and soar upwards to beautiful vaults decorated with filigree patterns.

The Hauptmarkt was the soul of medieval Trier, laid out in the 10th century after the previous one was ransacked during a Viking raid a few decades earlier.  The postcard-perfect square is framed by photogenic historic buildings and even today it is the gateway to some of Trier’s notable sights, including the cathedral and the Jewish quarter.  Reportedly, one of the buildings features an inscription claiming that Trier is 1,300 years older than Rome.  Today the market square is bordered by many cafes, restaurants and shops with fresh produce stands in the center.

Painted white and with colorful patterns around its semi-circular windows, the Dreikonigenhaus is a Romanesque and Gothic patrician house from 1230.  At that time defence was the first thing wealthy families were worried about, which is why the house is more like a fortified tower.  The front door is actually a few meters above the street, and householders would have used a ladder to get up or down.  That sounds inconvenient!!  In the middle ages Trier had as many as ten residential towers like Dreikonigenhaus, and this is one of three remaining today.

The Electoral Palace is one of the best expressions of Rococo art in Germany, the south wing was added to the original Renaissance palace in the middle of the 18th century.  Trier’s district government is based in the palace so access is restricted to guided tours.  The gardens are glorious, with rows of 18th century sculptures lining the borders.

Behind the Electoral Palace is the Aula Palatina, or Basilica of Constantine, a 4th century church that was originally a throne room for Emperor Constantine’s palace.  The proportions of the hall are mind-boggling, measuring 33 meters in height and 67 meters in length.  It was joined to the Baroque palace in the 17th century and in the 19th century it became a Protestant place of worship, making it the oldest building used for a church in Germany.  The interior is bare but impresses with it’s sheer size and coffered ceiling.

We covered a lot of ground during our six hours walking around Trier and I think we saw the highlights of the city.  There are a lot of beautiful places in the nearby countryside which we did not get to with such a limited amount of time here, but our visit was basically a layover before an exciting 4 day weekend with friends.  We are now off to one of our favorite cities in the world, Paris…..

WE ARE IN BAJA, MEXICO UNTIL EARLY FEBRUARY  🙂

I was up this morning in time to catch this gorgeo

Our new view after moving today into our final ren