We arrived in Reims via the 45 minute high speed train from Paris, after a long weekend with friends, for a few days of sightseeing in the heart of the champagne region of France.  Reims may be the most important center of champagne production, but nothing can prepare you for that first skyward glimpse of the gargantuan Gothic Reims Cathedral.  Rising high above the city the cathedral is where every French king, from 987 to 1825, was crowned.  Walking through the cathedral takes your breath away when you consider 900 years worth of royal coronations were performed in this magnificent building, and to think of all the historical figures that have passed through these doors.

Beneath the city of Reims are 250 km of caves, man made chalk tunnels, used to age the champagne.  The chalk caves provide the ideal temperatures and humidity for the second fermentation that takes place in the bottle and creates that wonderful fizz we all love.  Maison Ruinart was the first producer to set up in Reims and it’s tunnels, 40 meters underground, are protected as a historical site.  All the well known champagne houses are lined up and ready to take you for a tour of their caves in Reims.  During our previous visit to Reims we toured the Veuve Clicquot caves, at that time I worked for a company that imported Veuve Clicquot to Grand Cayman so Blair and I had a private tour of the caves and tasted some of their best champagnes, it was a fantastic experience 🙂

In my quest to try new champagnes we went for lunch at Cafe du Palais, renowned for their champagne selection.  The cafe, run by the same family since 1930, houses an eclectic selection of art evoking the many exhibits that have taken place here.  Our lunch was delicious and the house champagne a perfect choice. 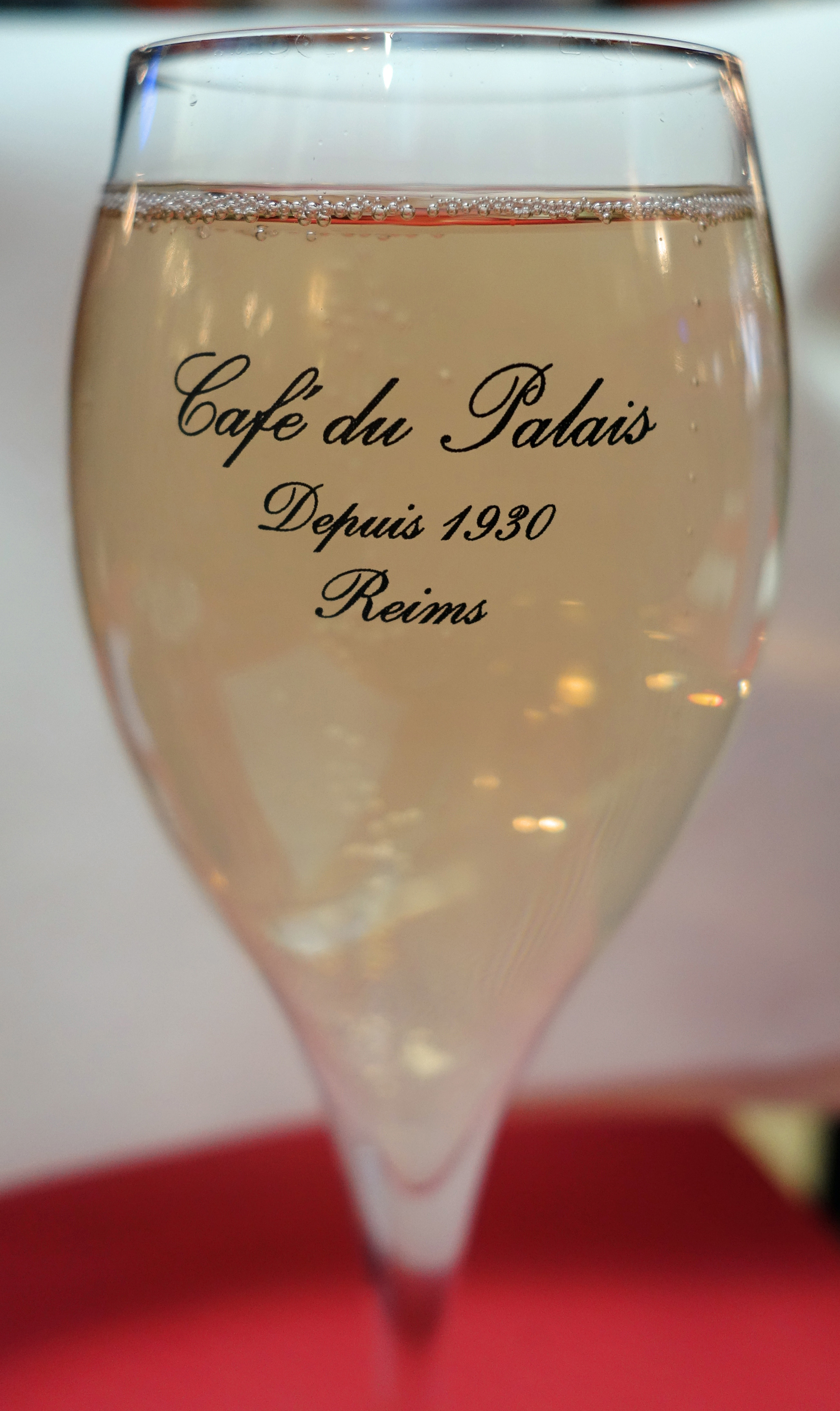 25 km South of Reims is Epernay, also known for their champagne cellars carved in the chalk rock beneath the town.  There are 110 km of of subterranean cellars under Epernay containing more than 200 million bottles of champagne just waiting to be popped for that special occasion.  Between Reims and Epernay the gently rolling terrain is filled with acres of vineyards supplying grapes to all the famous champagne houses, what a beautiful sight.

Place Royale was built in 1757 in honour of King Louis XV.  The architecture is typical of the 18th century and is the most magnificent square in the center of Reims, with a statue of King Louis XV dressed as a Roman Emperor in the center.  Just over the rooftops you can see the Reims Cathedral.

The Abbey of Saint-Remi is a UNESCO World Heritage Site and considered a Gothic masterpiece for it’s sculptural decoration and architecture.  Parts of the building are much older than the Gothic period, built in the 1000’s.  Inside the basilica are the relics of Saint-Remi, the patron saint of Reims, famous for converting Clovis, King of the Franks, to Christianity in AD 496.

The Porte de Mars is an ancient triumphal arch in Reims that dates from the third century AD, and was the widest arch in the Roman world.  The arch was named after a nearby temple to Mars, the Roman God of military might and war, and has many highly detailed carvings on its exterior and on the ceilings of it’s 3 passageways.  There was construction surrounding the arch so we were unable to get close and admire the intricate carvings.

Every May through September, and on holidays, the city of Reims hosts a spectacular light show at the Notre Dame de Reims Cathedral.  This is no ordinary light show though, it is a work of art.  The city recreates what they think the Reims Cathedral looked like after it was first built and painted.  The show lasts about 20 minutes and while we were there the first show began at 10:30pm, simply amazing and I have a couple of hundred photos for sure!!!  Click here to see a video I took during this amazing show.

Our 3 days in Reims were over much too quickly, there is so much more to see around this area, we would love to come back.  All too soon we were driving North to Cologne for a visit with more friends.  Germany, here we come…..

All the champagne houses offer tours of their cellars, during busy season we recommend you book early to ensure you get the tour you would like.

2 thoughts on “Reims, the heart of champagne”

WE ARE IN BAJA, MEXICO FOR THE NEXT FEW MONTHS  🙂

Took another drive to Puerto Escondido harbor and

Witches Paddle in Loreto Bay, a fun event to be a